For a long time, causes and capitalism ran on parallel yet separate tracks: philanthropists and entrepreneurs alike worked endlessly in order to gain attention and support from the public. Companies sought profit while charities sought aid. Today more consumers are seeking products, services, and retailers that use their influence and their means to support a good cause. Some  People want companies that give back to the community, and retailers have eagerly met this demand. Some companies host short-term campaigns in order to raise awareness and funds for a cause while others have established long-term, committed associations with philanthropies that they believe in. The companies and campaigns highlighted below illustrate how when a capitalist and a philanthropist collide, a new wealth of opportunities arise.

Target, one of the largest discounters in the U.S., is proud of their long history of philanthropy. Target has been donating 5% of their income to local communities since 1946. Their focus on charity has expanded since, and last year they launched an agenda called “Here for Good” that hosts programs surrounding education, the environment, safety & preparedness, and well-being. These programs, coupled with their social services, crisis relief, and their military and veteran support, Target has received accolades for their corporate social responsibility.

A brand-new glasses retailer, Warby Parker, had combined their cause with their product before the first pair of spectacles sold. For every pair of glasses that the company sells, they provide funding and/or glasses to a non-profit organization VisionSpring that trains men and women to sell glasses in developing countries. This model creates jobs while also providing glasses to a few of the almost one billion people worldwide in need of glasses. So far Warby Parker has distributed over 150,000 pairs.

Warby Parker’s model follows in the footsteps of the capitalism-cum-charity giant, TOMS. TOMS began in 2006 as a socially-conscious shoewear company that donates a pair of shoes to a child in need. TOMS founder Blake Mycoskie’s motivation for the company is simple: “If I started a charity, I’d have to go raise money every time I wanted to give them shoes. But if I started a business and made a shoe where the consumer liked it for what it was, then the consumer will be my natural provider of the shoes every year.” 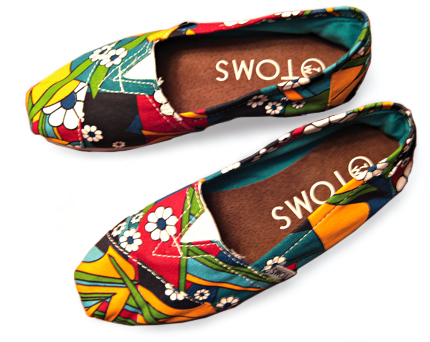 By September of 2010 TOMS had donated over 1 million pairs of shoes, and their popularity had exploded. Since its founding, the company has also put on an annual event called One Day Without Shoes that raises awareness for their cause, and they have established campus programs for passionate, involved students. TOMS has been praised as one of the most innovative retail companies of this decade, and it has been the exemplar of the for-profit-as-non-profit movement of the last decade.

These companies have created an easy link between consumers and charity; consumers are able to feel socially conscious and philanthropic while they get to buy the products and services they want. Meanwhile non-profit organizations get access to reliable funding sources and widespread exposure to their cause. The relationship benefits both parties, and most importantly, it benefits the people who need it most.