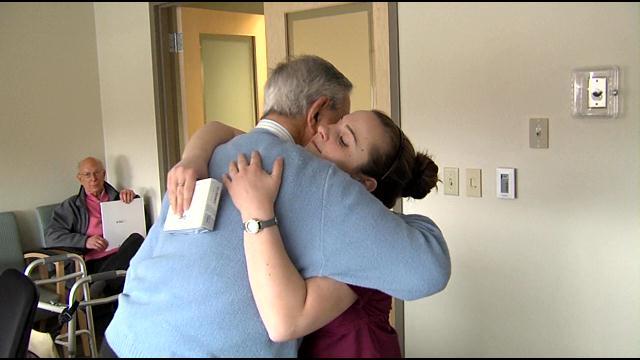 It’s the dream of many a waitperson: to go about your daily work routine until discovering that a patron has left you a generous tip of life-changing proportions. This dream became a reality for Melissa Mainier back in 2010, when one of her regular customers revealed himself to be a prominent philanthropist and offered to pay for her college tuition. Fast forward to 2014: Mainier is no longer working in the food service industry, and has been able to get her college degree and become a nurse, one of her lifelong dreams.

According to The Huffington Post, “Mainier had been on shift at the Peachtree Restaurant and Lounge in Harrisburg, PA, chatting with a regular customer, when she happened to tell him about her money troubles. She was working to pay her way through college, she told the older man, and was struggling under the weight of massive student loans.” Reportedly, the man said that he would like to help her pay for her college tuition, which came as a complete shock to Mainier at the time. How could a man I hardly know be willing to do something so generous? She asked herself.

The man that Mainier had been chatting with was none other than Benjamin Olewine III, a local philanthropist “known in the Harrisburg area for his big-hearted generosity,” The Huffington Post explains. Despite their hardly knowing each other, Olewine identified with Mainier’s tenacious spirit, and knew that he wanted to help her achieve her goals. Reportedly, Olewine’s fortune comes from the food service industry, where four generations of Olewines have thrived and given back to their communities. Olewine III has donated vital funds to local hospitals, academic institutions, wildlife initiatives, arts and cultural programs, and much more.

Perhaps the best part of this uplifting story is the fact that Mainier now works in the very hospital wing that was named for Benjamin Olewine III and his generous lifetime of giving. Both Olewine and Mainier continue to work to pay it forward, and have inspired many people to find ways to be generous in their own lives.