Have you considered donating goods to charity instead of cash? It can be worthwhile, under the right circumstances, to donate clothes or household goods: you get rid of some clutter and help out a charity. Everybody wins.

It’s not really that simple though, and like any charitable donation, giving physical goods requires some thought. Perhaps more so than donating cash. 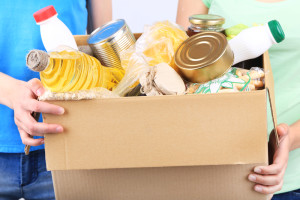 Consider what items you want to get rid of, and whether or not they’re even worth donating. Most charities need new or gently used items. Appliances that don’t work or clothes with holes and the like aren’t really helpful. Carefully consider what you want to donate before you do so. Don’t make somebody else do the job of throwing out your garbage.

If the items are worth donating, you should also consider selling them yourself and then donating what you make. This is easier for the charity, as it gives them more freedom to spend that money, and it’s easier for you, since it makes claiming the donation on your taxes much easier. Selling items on Cragislist or eBay might work, but so could organizing a garage sale, especially if you have friends or family who want to do the same.

You might even be able to unload those worthless old appliances or clothes to people who want them for scrap metal or the like. Just because an item can’t be used by a charity doesn’t mean it can’t be used by somebody else.

If you don’t want to sell the items yourself, and you’re sure they’d be useful, look for some local charities that accept donations of goods. Staying local helps your community, and it also reduces the time and money you have to spend transporting the items. Charities which accept goods will generally indicate this fact on their website, and usually offer some guidelines for what they need and how to donate. If you’re not sure if your items will work, email or call the charity and ask. It’s possible that, even if they can’t take your old clothes, they’ll know of somebody else who can.