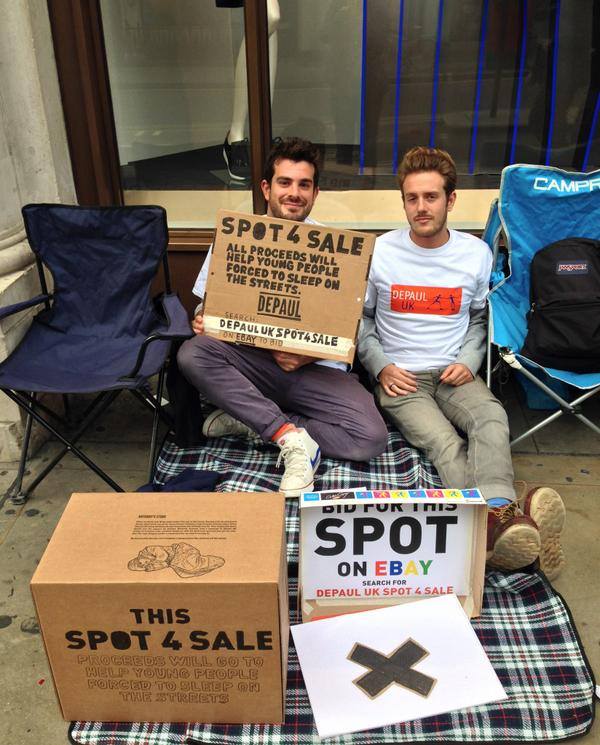 Representatives from a British charity recently had an ingenious plan to raise money for their organization: find something that everyone wants. With the launch of the iPhone 6, thousands of people camped out overnight and waited in line for hours to get their hands on the new phone. Depaul Uk, a charity that helps the homeless, auctioned off its fifth place spot in the line outside the London Apple flagship store.

The spot was listed on Ebay and bidding closed at 6am the morning of the launch, giving the winner time to rush down and claim their place in line. The auction described itself as “one spot near the front of the queue outside the Apple Store on Regent Street, London.” The person who won was also required to wear a Depaul UK shirt before heading into the store. The night before, the auction had already received close to 60 bids.

Volunteers for the organization stood in line for over 48 hours at the Apple Store in Oxford Circus, London. Adam Taranissi made the winning bid of $734 for the prime spot in line. Proceeds from the auction will go towards helping homeless youth in the city.

The stunt was actually devised by Publicis London for the charity. Not only did the auction create buzz for Depaul UK, it also garnered the attention of a much younger demographic of donors than the charity typically works with. Currently, the largest donor base for homeless charities in the UK is the over-65 crowd. More high-tech millennials became aware of the organization and its services because of the iPhone 6 line spot auction, which is a win for Depaul UK regardless of funds raised.

Depaul UK is “a values led organization,” explains its website. Its mission is to “offer homeless and disadvantaged people the opportunity to fulfill their potential and move towards and independent and positive future.” Learn more about the organization by visiting www.depauluk.org.