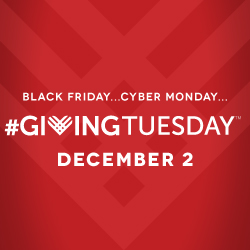 Today is Giving Tuesday, a chance to donate vital funds to worthy nonprofit organizations across the country. Now in its third year, the charitable social media event is bigger than ever, drawing in thousands of participants and raising millions for nonprofits.

Giving Tuesday in and of itself is a fantastic campaign and social media event. It challenges consumerist culture and invites people to give back rather than take during a time of year when storefronts and countless ads are telling us all to thoughtlessly consume. By now you’ve likely seen the trending hashtag #GivingTuesday on social media, but have you put any thought into who sparked this charitable campaign?

92nd Street Y is a “world-class cultural community center where people all over the world connect through culture, arts, entertainment and conversation,” explains the organization of its more than 140 years as a leader in community building through the arts. “92Y enthusiastically welcomes and reaches out to people of all ages, races, faiths and backgrounds while embracing Jewish values like learning and self-improvement, the importance of family, the joy of life, and giving back to our wonderfully diverse and growing community, both locally and around the world,” says the organization.

The United Nations Foundation “links the UN’s work with others around the world, mobilizing the energy and expertise of business and non-governmental organizations to help the UN tackle issues including climate change, global health, peace and security, women’s empowerment, poverty eradication, energy access, and U.S.-UN relations,” explains the organization. It’s the Foundation’s mission to fosters a more peaceful and just world, and works towards this goal by supporting programs like Giving Tuesday.

Interested in learning even more about the partners and founders of Giving Tuesday? Be sure to visit the campaign’s official website!